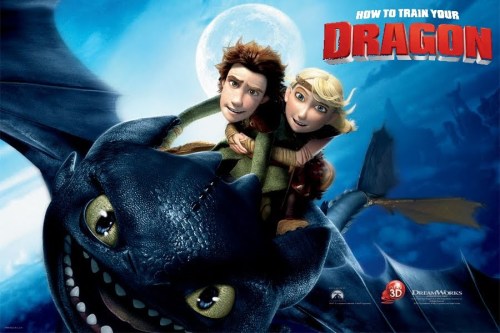 Last week I went to see How to Train Your Dragon with my daughter on her birthday on an IMAX screen. I had been looking forward to seeing this movie ever since Avatar premiered. I had not seen any previews and the only thing I had to go by was the postersand the fact that it was made by DreamWorks, the studio responsible for the equally excellent Kung Fu Panda.

The movie is based on author Cressida Cowell’s books of the same name. I didn’t know anything about the books before going in. I would’ve definitely purchased the first book for my daughter to read before seeing the movie.

Cutting to the chase, once again DreamWorks hit this one out of the ballpark. I LOVE this movie as so did my daughter. I was actually very surprised that for weeks before the film’s release, she had been wanting to see this movie for the longest time. I have no idea why but she definitely gravitated to this story.

The movie is about a young, scrawny viking by the name of Hiccup (voiced by Jay Baruchel) who is a misfit among his viking village. He’s smart, mechanically inclined, good with illustrations and has above average observational skills. Combat skills and wielding swords, shields and various other weaponry are sorely lacking, much to the disappointment of his father, Stoick (voiced by Gerard Butler). When the village is attacked by dragons, Hiccup uses one of his inventions and hits a rare, never-before-seen black dragon. Injured and unable to fly, the dragon is spared by Hiccup, not having the heart nor the will to kill the creature. Naming the dragon Toothless, the two form a secret bond and friendship. He learns much about dragons from Toothless and realizes that he cannot be a dragon-slayer like his father wants him to be. While his father sets out to destroy the dragons that attacked the village, he leaves Hiccup behind to be trained by this friend and hardened dragon-slayer, Gobber (Craig Ferguson). There he meets Astrid (America Ferrera), a fierce young warrior who aims to be the best dragon-slayer in the village. Hiccup struggles to keep Toothless’ existence a secret while learning how to defeat dragons so as not to disappoint his father nor the village.

The animation is simply beautiful. I am amazed at the sheer talent and technological prowess that these animators possess. The facial expressions, mannerisms and physicality of the characters, coupled with the excellent voice acting, makes this movie my favorite of all animated films thus far. I studied every frame for details: from Toothless’ glistening obsidian skin texture and the hair from various furs swaying in the wind to the wispy clouds and balls of fire billowing forth from the dragons, I was blown away. It seems that with every year, animators keep pushing the envelope of their craft and technology.

The voice acting is definitely spot on with the exception of Jay Baruchel and America Ferrera and the rest of the viking youths (voiced also by Kristen Wiig and Jonah Hill). Don’t get me wrong, they were excellent but when compared to Gerard Butler’s and Craig Ferguson’s over-the-top accents, hearing the “American” vikings speak kinda threw me off a little. Still, they ALL did a great job. Speaking of voices, I was definitely glad that the dragons did not speak. I read somewhere that in the books, the dragon had their own language but in this movie, they did not talk. Whoever made that decision to do away with cutesy speaking dragons was absolutely correct. It gave the dragons a slight edge in portraying them as fierce and dangerous creatures.

The aerial scenes with Hiccup and Toothless are stunningly breath-taking and the climatic battle at the end was awesome, especially when seen on an IMAX screen. I have stated before that 3D movies really don’t bother me if they are really well done and not just used as a cheesy gimmick. It seems that this movie was meant for the IMAX screen. I think that 3D is definitely here to stay. Now if the Notebook is re-relased in 3D, well…

Unfortunately, 35 minutes into the movie, it suddenly stopped. The lights went on and everyone was confused. Theatre ushers came and explained that the projector malfunctioned. They offered to take us to another screening but not an IMAX screen. As we exited, I was given “re-admit” tickets to see any movie of my choice which more than made up for their technical snafu.

It was a Real3D screening. We had to watch a considerable portion of the movie all over again. My daughter and I didn’t mind at all. However, there is a difference between IMAX 3D and Real3D. For one, the screen is considerably smaller. The 3D glasses were different, looking more like 80’s Wayfarer glasses and the seating wasn’t stadium-style seating. I tried to see if the 3D effect itself was different but I just couldn’t tell.

How to Train Your Dragon was a wonderful film that I recommend for all families. It’s funny, action-packed, and even touching at times. Both parents and children will definitely enjoy this movie so go out and have a great time.

2 thoughts on “How to Train Your Dragon”