In 2006 I decided to finally leave the world of Windows and the PC and embarked on a whole new adventure: I purchased my first Mac and dove head first into Apple’s streamlined and simple OS. I purchased a 1st generation Mac Pro with its new Intel Processor inside. It’s a decision that I have not regretted at all. I was glad to be rid of the frequent blue screens of death, buggy programs, unexpected shutdowns, viruses, crashes, frozen screens, and a slew of other PC related problems. I’m a very competent and tech-savvy computer user, A+ trained and having attended several Microsoft Certified training programs so diagnosing and fixing these issues wasn’t a problem. I was just plain tired of periodically doing so.

There were several things that I did miss when I made the switch however: computer games were more prodigious on the PC (I miss my Flight Simulator), running several Windows-only software, and the ease of which I could swap out hardware. Boot camp solved the software issue to an extent. Machine virtualization is still far from perfect. As far as gaming goes, Macs will never best the PC as a solid gaming rig but companies at least are starting to ship more titles for the Mac OS (thanks to Steam and Blizzard among others). I do all of my gaming on the Xbox or PS3 so that’s a moot point now. The hardware issue isn’t so bad. Since I purchased my Mac Pro, I have upgraded my monitor (sporting two LED LG monitors), added more RAM, installed three additional internal hard drives and two external drives and installed another DVD-ROM unit (with Lightscribe – which I don’t use at all). The video card is the only piece of hardware that proved to be frustratingly challenging (don’t get me started on the sound card).

Not only are video cards for the Mac expensive, but you have to get the right and precise one. Gone are the days when I could simply walk in to Best Buy (or go to a computer show) and simply look up the specs and get a video card. All I had to do was choose between ATI or Nvidia, between AGP, PCI, PCIe, or SLI cards (depending on my rig) and finally factor in the cost. I usually walked out with a great, affordable card with NO issues whatsoever once installed. Those were the good ol’ days.

Now I have only VERY limited choices if I wanted to upgrade my Mac Pro. As per Apple’s own site, these are my choices:

That’s pretty much it. It’s a paltry selection indeed. When my original card started to die, I went ahead and purchased the upgrade option. Going directly to an Apple store was not in the cards for me. I was going to blow $300 or more for that piece of hardware. Instead I went online and was able to shave off a couple of pennies but it was still costly. Now I needed to do another upgrade but the choices that were left were very poor and outdated. These cards were beginning to show their age. I do a lot of video and photo editing and wanted the latest and greatest technology.

I went online and did my research. I searched through countless forums and read what other users were experiencing. I finally was able to find a card that most in the Mac community were happy with: the ATI Radeon HD 5770 video card. I even saw that many 1st gen. Mac Pro users were pretty happy with it. I was highly dubious of these accounts but many swore on this choice, stating how great the card was. I went online and found one on Amazon. I instantly purchased it for $246.99 (a whopping $2.01 cheaper than Apple). Still pricey but did I really have a choice? Interestingly enough, the PC version of the same card is $100 cheaper – so not right. If you’re adventurous enough, you can get the PC version and flash the card so it would work on the Mac but who wants to go through all that trouble? One wrong misstep and you can tragically ruin the card. Also, the cable isn’t included in the PC version.

I got the card this afternoon and installed it immediately. It was a simple affair really. The only great concern I had was not being able to slide it in effortlessly into the slot. For a moment I thought that I would have to return the card. All I had to do was angle it correctly while inserting and it went in snugly. Upon power up, nothing happened. Both monitors were in power mode! I realized my very dumb mistake: I forgot to attach the included power cord to the card and motherboard. Removing the cables again and opening it up (this monster is heavy!) solved the problem.

So far everything’s working fine! The immediate thing I noticed is how quiet the card is! My previous card made such a loud noise due to the fan. This is whisper quiet – worth the price alone on this! I have DVI monitors so attaching one to the DVI port was not a problem. I had to rely on an adapter for the second one. Upon booting up, my secondary monitor went up with the grey apple logo in the center. The primary monitor was in sleep mode. Crap! I thought that there was something wrong with the connection so I switched mini display ports. The monitor came on. When I rebooted the machine, I experienced the same problem. It was then that I realized that this is just normal. I will always have the black screen on my primary monitor (the one with the adapter) upon boot up. Many users wrote about this in the forums so I guess this is normal for the card.

For those of you on the fence whether or not to get the 5770 card for your ver. 1,1 Mac, go ahead and do so. Just make sure that you’re running the latest version of your OS. I can’t confirm how it will perform on Snow Leopard (or even Leopard) but on Lion with version 10.7.2, it’s running smoothly. 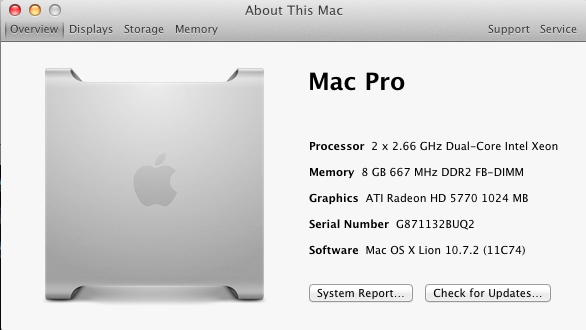 Upgrading the video card on this venerable workhorse breathed new life into it. With this last hardware upgrade, I’m confident that I can throw everything at it and still produce stunning results for years to come.