That’s me taking off for the first time alone in an aircraft!

Ever since I was a child I’ve always looked up to the sky, dreaming that I would someday be a pilot. When I was in my early 20’s, I made those dreams a reality when I finally went to flight school. I wanted to be a helicopter pilot so I packed my things, gave up my jobs (I had two) and my NYC apartment and went to Alabama to learn how to fly. I attended the now defunct Alabama Aviation & Technical College (now part of Wallace college). In the three years that I lived in Alabama, my flying days were truly special and most memorable. The single-most import milestone every would-be pilot accomplishes is their first solo.

My first solo came rather unexpected (rarely is a pilot told when that day would come). Shortly after 10 hours of flying and doing some touch-and-go’s (briefly landing an airplane and immediately taking off again) on this beautiful summer day, my instructor promptly opened the door to the still running aircraft and walked out onto the runway, telling me that I was ready to go solo, much to my total surprise. I was to do three touch-and-go’s and come to a full stop afterward. After a slight mishap with the radio (I wasn’t able to hear my instructor’s reassuring voice, reminding me of what to do on my own), I was able to fly solo and land successfully.

After every solo, the instructors and other pilots would “celebrate” this momentous occasion by taking a big container full of water and completely soaking the newly soloed pilot. I don’t know if this type of celebration is common among other flight schools (please someone confirm) but this was really popular at ours. This celebration was not well known among the new pilots as we tried to keep it a secret so as not to spoil the surprise. We would also take the pilot’s white t-shirt and draw on it a runway and plane along with the date of the first solo.

For today’s weekly photo challenge, I thought of this unusual celebration the student pilots at AATC were part of.

Fueling for today’s flight. Little did I know that today would be the day that I would fly on my own for the first time. 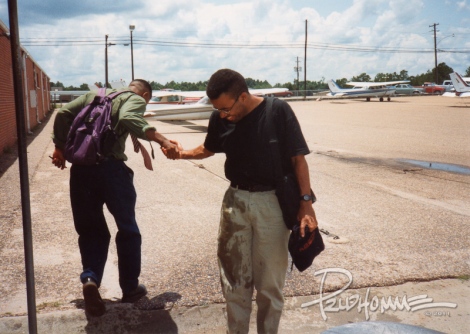 My instructor runs away laughing as he set me up for a shower. I had avoided most of it.

I was in the right position to take the “money shot” of my friend Tony getting doused! They got him REALLY good!

I eventually got my private pilot license and commercial training (but not the “ticket”). Life has a funny way of throwing curve balls so I am not flying full-time as a career (although I often daydream about returning somehow). Since my flying days, I returned to NY and went on to get a B.A. in Aviation Business studies and then a Master’s in Education (two noteworthy celebrations).

I don’t regret deviating from my lofty aviation endeavors but you can still catch me looking up to the skies whenever an airplane or helicopter flies overhead, instantly transporting me above the clouds with recollections of good times experienced in the southern sunny skies of Alabama.