I was in need of a new compact camera. Photographers, amateurs and pros alike, salivate over new equipment, whether it’s lenses, camera bodies, tripods, heads, bags or that new software update/upgrade to make our digital darkroom that much better or improve upon our skill, I’m no different. I’ve been looking to make this purchase for over a year now. I was patient and I was frugal. I saved up my money and dived in and made the commitment.

After much reading, reviewing and comparing I narrowed it down to three cameras I had my eye on. I finally settled for Canon’s new Powershot G12. I do not regret this decision and I’m having a lot of fun taking pictures with it.

I am the happy owner of Nikon’s D90. It was my first DSLR. I actually got the camera after I sold my Canon Powershot G6, stepping up in equipment and challenging my skills as an amateur photographer. I loved the creative freedom the G6 offered but thought it was about time I upgraded to a more sophisticated piece of equipment. I started learning photography at the age of 13 and it was a 35mm Nikon FG that started it all for me so it was fitting to go back to Nikon.

But I missed my little Canon G6.

That camera was my workhorse; it was convenient to carry despite its slight bulk, offered advanced features, manual control, had a nifty swivel-mounted LCD screen and shot great images. I soon realized that I shouldn’t have sold it to my rather happy neighbor (a first time photographer herself) and when I asked to buy it back, promptly refused to give it up. I don’t blame her.

I needed a high-end camera that was compact enough to carry on overnight business trips, bike outings, or social gatherings at restaurants or bars but comparable to my DSLR in features and versatility. There’s a myriad of compact cameras out there, too many to choose from. I knew exactly what I wanted however and the choices boiled down to the Canon Powershot G12, Nikon Coolpix P7000 and the Panasonic Lumix DMC-LX5.

All of these cameras are fine choices. The 10 megapixel Lumix is smaller of the three and least expensive. It has a faster Leica lens (F2.0) and can record AVCHD video, a format I’ve been curious about editing with. The 10.1 megapixel Nikon was definitely a serious contender with its 7.1x wide-angle optical zoom (28mm – 200mm), 3 inch LCD display and the ability to use your own microphone during 24fps HD recording. But I HAD to go with the G12.

The G12 is also 10 megapixels, records 720p HD video (unlike the previous G11) but has a slower F2.8 (28mm – 140mm) lens. I chose the G12 because I was very familiar with the Powershot G series, having owned four of them. Another deciding factor in my decision was the vari-angle, 2.8” LCD screen. That feature has proven very useful for me through the years. I don’t care much for it on a DSLR but on this high-end compact, it was absolutely necessary.

I unpacked the small box and took out the camera. It was much smaller than I expected. Inside the box contained a mini USB cable, CD-ROM software, battery pack and charger, stereo AV cable, English/Spanish quick guides, warranty card and camera strap. No SD card was included. Luckily I had an extra one lying around.

The camera felt comfortable in my hand despite the small compact form. The construction is solid: no cheap plastics used here. The controls, wheel dials and buttons are appropriately placed and easy to use. I love the inclusion of the “old school” manual dials on top of the camera. Those dials include exposure compensation, ISO settings and shooting modes. The inclusion of the front dial is very convenient for use during full manual mode. Zooming in and out is smooth and responsive. 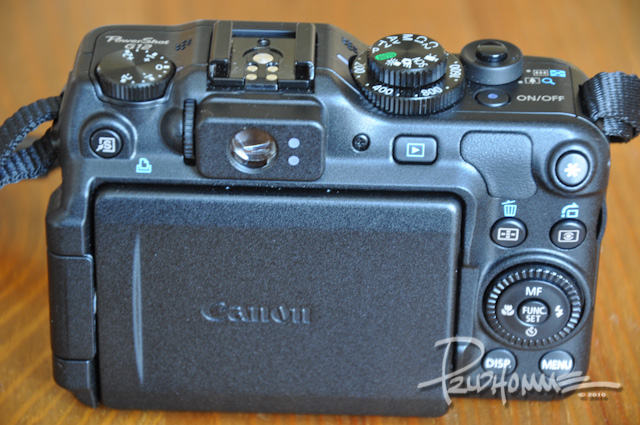 When not in use, the lens retracts and closes up. One of the things that highly annoyed me with the previous Powershot G models I owned (the last one being the G6) was the flimsy lens cap. It kept falling off all the time. Now there’s no lens cap on the G12. The lens automatically shuts off after a minute and shuts close. Another small thing that meant a lot to me was that when you previewed images, you could set the camera to automatically close the lens. No more accidental finger smudges on the lens when you just want to pass the camera to a friend to review the picture. This was a big deal for me.

The LCD screen is just the same as in previous models but slightly larger. I use it to take pictures at weird angles or from a very low vantage point. I guess using the LCD is preferred over the small viewfinder when taking pictures. I like taking my pictures using the viewfinder but on the G12, it’s pretty small and the image is tiny, akin to looking through a peephole. Also, the barrel of the lens sticks out just a little on the bottom when viewing through the viewfinder. I like to conserve battery and not rely on the LCD screen but in this case, I might have to rely on it more than ever before.

I have a dedicated video camera for shooting video but it shoots in SD. I played a little with the D90’s HD video but on this camera, it was much easier and fun to shoot. The sound is recorded in stereo, as there are two small mics on either side of the hotshoe. Fiddling with the dials or zooming in while shooting HD can produce unwanted noise on your final product.

I normally don’t care about the software included but in this case, the only one of note is Photostitch 3.2. I’ve used version 3.1 and it really is one of the best out there (in my humble opinion) to help photographers stitch multiple photos together. Sure, you can use Photoshop but this software is simple and easy to use (and free!). There’s a photo editor and manager included but nothing to write home about.

The only drawback to my purchase is that when shooting in RAW, I have to rely on the included software to edit my pictures. Referred as DPP, Digital Photo Professional is a RAW image processing, viewing and editing software for EOS digital cameras. As of this writing, Photoshop CS5 and Lightroom 3’s RAW editor will not support the G12. The Nikon Coolpix P7000 and the Panasonic Lumix DMC-LX5 are supported. So I guess I’ll have to hang on to the included CD-ROM until support eventually arrives. Adobe is pretty good at updating their RAW plug-ins so it’s only a matter of time before I inevitably turn the software disc into a coaster.

There are a ton of other great features on the Powershot G12. I will direct you to the Canon website to review those features on your own but I will mention just a few I recently discovered while playing with it in just a few scant days:

The HDR feature is something that I’m sure will be standard on ALL cameras. Heck, the iPhone 4 is touting it as a solid feature. Basically you can shoot up to three images at varying exposure levels (exposure bracketing) and then merging them via software (either in-camera or by using Photoshop or the highly excellent software, Photomatix Pro) to produce a high-dynamic range photo that will include the highlights and dark shadows of a photograph. It’s hard to explain. It’s better to simply see an HDR photograph to see what all the hoopla’s about. Check out one of the masters at work with HDR at www.stuckincustoms.com.

Some people can produce some really bad HDR images while others can use the technology to seriously produce works of art. I am fond of HDR photography and have been known to use it from time to time, especially during sunsets or the “magic hour”.  Despite the controversy over HDR photography, when you see an image done right, there’s no denying the positive spin it brings to photography.

I am really happy with my purchase of the Powershot G12. It has all the features of a DSLR camera but in a small package. It makes the perfect backup camera for travel and for home. I will never stop using my D90 in lieu of the G12 but it’s good to know that when I want to take a break from lugging the big DSLR around, I can still take serious pictures with the G12. The Coolpix and Lumix are great cameras in their own rights but as a loyal and familiar customer of the Powershot series, I feel I made the right choice.

When I showed my neighbor (the owner of my G6) my new “toy”, she was absolutely jealous and now wants one of her own. She was reading a recent issue of a Martha Stewart magazine in which she raved about the G12, writing about how she takes it everywhere and uses the HD movie mode constantly. There you have it folks. If it’s good enough for Martha Stewart then it should be good enough for you!