A couple of weeks ago, I finally made the decision to buy a bike rack. After scouring the internet for the right one that will fit my 2003 Mustang, I finally decided to get the Saris Bones 2 rack. I was a little apprehensive about it because I just didn’t know if it would clear my car’s spoiler. I’ve read online of how the Saris fits other car models but I hadn’t seen anything written specifically for my car. Before diving in and purchasing however, I had an idea.

I went to my local bike shop and saw that they had the Saris Bones 2 and 3 models. The friendly staff took it out of the box and showed me how to install it. It was super easy and very intuitive. Seeing that it was going to be a perfect fit for my Mustang, I checked the price. It was going to cost $149.99 plus tax, making it well over $150. They also offered an Allen bar for my daughter’s bike for $25.00. Not digging those prices, I went home and immediately went online to good ‘ol trusty Amazon.com.

Not only was it cheaper, I was able to get it delivered for free! While I was at it, I purchased their Allen bar at a cheaper price as well and had both products delivered to my home within 4 days!

After checking out the Saris website and seeing one of their videos (didn’t really need to but just in case…) I went and installed it on my car. It was very easy and it took about 15 minutes. I wanted to make sure everything was right so I took my time. I put the bikes on the rack and re-checked it. The rack comes with six straps but I only put four (the top two and the bottom two, forgoing the side straps). The rack cleared the spoiler with ease. I made sure that the bike rack arms were at a height that was just right and that when the bikes were attached, would clear the ground with ample space. The bikes were also well away from the rear of the car and bumper so no part of the bikes were hitting the car, not even the pedals. Very nice.

The center arm clears the spoiler with ease.

The Saris Bones is made of sturdy plastic, making it very light. The plastic straps are very convenient in keeping the bike securely attached to rack. The rubberized ends of the rack rested nicely on the bumper and on the top of the trunk. There was no play when all was done.

Ready to hit the road with bike in tow and an eager daughter in back seat.

I drove out slowly to my favorite bike path, wincing with all the potholes and bad road conditions along the way. After a while I had to stop because I noticed the bikes swaying from side to side precariously, especially during turns. The top arm of the rack would sometimes lift off the trunk by a few centimeters. I tightened and readjusted the straps and continued driving, always keeping a vigilant eye on the bikes and never exceeding the speed limit (according to the manual, top speed with the back rack installed is 65 mph). I knew that I had to probably put the side straps on. I thought they would only be needed with SUVs and other vehicles. I saw that it was an absolute MUST no matter what car you attach the bike rack to. It just takes an extra minute to do so and grants you an incredible peace of mind on the road.

This was the most appropriate place to put the side straps on my Mustang. It's a tight fit but it'll suffice.

The next outing, I went ahead and attached the side straps to the car. I found it initially difficult to attach to the Mustang so  I had to find an appropriate spot for them. Finding it, I put the bikes on and then readjusted the straps again. I was very satisfied with the results. I noticed  that the metal ratchet on the straps were very close to my spoiler. Not wanting scratches on the spoiler, I used the spare end of the straps and wrapped it around the ratchet. It would’ve been nice to have some free accessory (like a small velcro cover) to remedy this.

Metal ratchet is too close to the spoiler for my tastes. 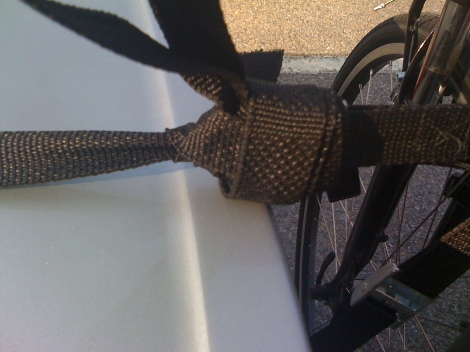 Wrapping the strap around the metal ratchet solved the problem easily.

The next drive out proved to be much better. The bikes were very secure and there was little play when driving, especially during the turns. Getting the bikes on and off has gotten very easy and the whole procedure is now routinized, taking me around ten minutes to do the whole job.

I am glad I bought this bike rack. The design is very attractive, sleek, simple and sturdy. When not in use, it’s stored away in my trunk effortlessly. Saris is known for making high quality products and I can see why. I am also comforted by the fact their warranty is lifetime so if anything goes wrong during normal daily use, I can return the unit with confidence for a repair or a complete replacement.

If you were ever in doubt as to whether or not this was the perfect bike rack for your car, especially if you drive a Mustang, trust me, you’ll not regret purchasing this product. Go ahead and buy it off of Amazon and save a couple of bucks on a high-end product.

There was an error retrieving images from Instagram. An attempt will be remade in a few minutes.