How could I’ve been so careless and stupid? The minute I did it I had that sinking feeling in my gut. I just KNEW that I was caught red handed and that the proverbial hammer would be dropping out of the sky soon and strike me down. The irony of it all is that as an enthusiast photographer, I was done in by a series of photographs.

I am speaking of course of the Red Light Camera Monitoring Program all throughout New York City (and across country for that matter). For years I’ve read and heard that Big Brother was encroaching into traffic violations and using technology in its battle to catch offenders. It’s one of those things that was mildly amusing to me but I never paid it any mind as I am a careful and lawful driver. If I ever speed, it’s only 10 – 15 miles over the limit. I always stop at Stop signs and NEVER blow past a traffic light. I also NEVER drink and drive. As a matter of fact, I am THE designated driver no matter where I go as I am not a drinker. Me being caught on camera on a traffic violation was the furthest thing on my mind.

…Until that fateful day in January when I knew I hadn’t beat the yellow light and crossed the intersection when the light had just turned red. It was totally my fault. It was either come to a screeching halt at the light or tempt the fates and take a gamble. The $50 ticket I got in the mail yesterday told me I had lost that gamble. How foolish of me.

Looking at the letter with its bright color photos of my mustang crossing the red light actually made me laugh. Yeah, they got me and I couldn’t really deny it. I was actually both amused and in awe of the technology. Not only did it catch me crossing the red light, but they zoomed in on my license plate with sharp clarity. There was simply no escaping it. It was me alright.

The camera took a picture right when the light turned red and then one second later it took another picture. Pretty slick I must say. 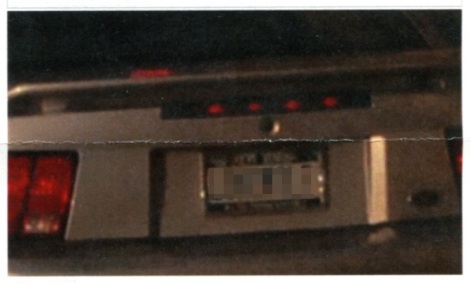 Flipping the letter over I saw instructions on how I could go and plead Not Guilty and try to fight this ticket. Are they kidding me? The ridiculousness of that proposition made me laugh even more. You’d have to be a fool to go into court and try and fight it despite the photographic evidence. “It wasn’t me!” simply wouldn’t cut it (in that event, you better bring a police report stating that your car was stolen at the time of the infraction – seriously).

I reluctantly got my checkbook and wrote a check for $50. Damn. Serves me right.